Why would I ask that..? Well, first off, he was raised Catholic and he even studied to be a Catholic Priest. His mother is a practicing Catholic AND Scientologist. The web site adherants.com has him listed as currently Catholic. Tom Cruise is also godfather to Jennifer Lopez's and Marc Anthony's twins. Lopez and Anthony are very religious Roman catholics so it's odd that they would have Tom Cruise to be the godfather of their Catholic twins.

Here's where a big piece of a possible Psy-Op (Psychological Operation) comes in. Tom's former wife, Nicole Kidman is a Roman Catholic and stated publically that scientology isn't compatible with catholicism and thus aided the split between them ending in divorce. What more public way could Roman Catholicism be divided from Scientology? It seemed like someone or some entity was trying to mold opinions through the whole thing (i.e. Scientology is bad and Catholicism is good.).

I could go on here and piece together a lot more regarding this. But let me say Scientology is very odd in itself. I believe Scientology is in fact a huge Psy-Op. Think about the fact that L Ron Hubbard was NAVY Intelligence officer. He then starts this religion and begins stating that the CIA and FBI is bad. Congressman Leo Ryan (who was Jesuit schooled and a religious Roman Catholic) was an outspoken critic of Scientology and then was assassinated in Guyana while investigating Jim Jones and Jonestown. In the wake of Leo Ryan's assassination, CAN (Cult Awareness Network) was created. CAN went after Scientology and was sued by scientology and Scientology won, and then took over CAN. Are you beginning to see what's happening?

There seems to be a tremendous drama being played out before our eyes. The whole thing seems contrived and I suspect the ending of this drama won't be very nice. -Thomas Richards

Mainstream News and other info:

"Claus Philipp Maria Schenk Graf von Stauffenberg (15 November 1907 – 21 July 1944) was a German army officer and Roman Catholic aristocrat who was one of the leading officers of the failed 20 July plot of 1944 to kill German dictator Adolf Hitler and remove the Nazi Party from power in World War II Germany. He was one of the central figures of the German Resistance movement."

The von Stauffenberg family is one of the oldest and most distinguished aristocratic Roman Catholic families of southern Germany.

He was also closely associated with Alfred Delp SJ. Supposedly these men were a part of a resistance against Hitler. Link 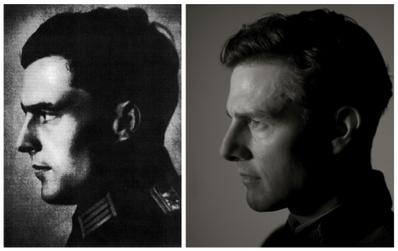 "Alfred Delp, SJ, knew he was on trial for his life in this Berlin courtroom in January 1945, charged with knowing about a failed attempt to assassinate Hitler. Seated behind him is Helmuth von Moltke, another implicated in the plot." (The men around him were the SS police force known as "Orpo" short for "Ordnungspolizei" of whom Joseph Ratzinger Sr was one.)

"Eric Jon Phelps on page 620 in Vatican Assassins III quotes Hoensbroech and shortly the Jesuit Alfred Delp is mentioned - I had a closer look at him and think Delp was just a patsy to justify what they already had in store - because Delp, like Augustin Bea (who also was admired for what he did to this day) was directly commissioned by Ledochowskis Provincial Augustin Rösch SJ!

This was not only to have a "fake" resistance but it actually seams the Nobility and the Provincial worked hand in hand to create the successor political party for the Superior General."

This is Timothy's blog. I agree with his synopsis on Alfred Delp SJ

Other famous men who were in on the supposed assasination plot against Hitler were the Jesuit Trained Boeselager Brothers:


The Freiherr (88), showing a photo of his Fieldmarshall

This is what I believe to be in essence a fake story that was told toward the end of WW2 to save face of the powerful BOESELAGER family who had two nazi sons, one of which actually trained to be a Jesuit Priest. -Thomas

"At the height of WW2, a group of high-ranking German officers hatched a plot to assassinate Adolf Hitler, and seize power of the military command in order to end the war. The operation was codenamed "Valkyrie", for the emergency plan that was meant to be used in case of a revolt against the Nazi government. This plan had been modified by the conspirators to ensure their success, but for various reasons the plot failed when finally carried out on 20 July 1944. The conspirators of the inner circle were shot after a kangaroo trial or sentenced to death soon after. "

"On 4th April 2008 I received a personal letter and a signed photo from the German aristocrat and resistance fighter Philipp Freiherr von Boeselager. On 1st May 2008 he died at the age of 90 years. For many years I am collecting rare autographs.

Philipp Freiherr von Boeselager (6 September 1917 – 1 May 2008) was the last surviving member of the July 20 Plot, a conspiracy among high-ranking Wehrmacht officers to assassinate German dictator Adolf Hitler in 1944.

Boeselager was born at Burg Heimerzheim near Bonn.

When Boeselager was a 25-year-old field lieutenant, he was part of Operation Walküre, which was a plan developed to re-take control of Germany once Hitler had been assassinated. Boeselager's role in the plan was to order his troops (who were unaware of the plot) to leave the front lines in Eastern Europe and ride on commandeered horses all the way back to Berlin to seize crucial parts of the city in a full-scale coup d'état after Hitler was dead.

Boeselager's opinion turned against the Nazi government in June 1942, after he received news that five Roma people had been shot in cold blood, solely because of their ethnicity. Together with his commanding officer Field Marshal Günther von Kluge, he joined a conspiracy to assassinate Hitler. The first attempt was in March 1943, when both Hitler and Heinrich Himmler were coming to the front to participate in a strategy meeting with Kluge's troops.

Boeselager was given a Walther PP, with which he was to shoot both Hitler and Himmler at a dinner table in the officers' casino. However, nothing ever became of this plan, because at the last minute, Himmler left Hitler's company, and the risk of leaving him alive to succeed Hitler was too great.

The second assassination attempt was in summer 1944. No longer caring about Himmler, the conspiracy planned to kill Hitler with a bomb when he was attending another strategy meeting in a wooden barracks. When the assassin's bomb failed to kill the Führer, Boeselager was informed in time to turn his unexplained cavalry retreat around and return to the front before suspicions were unduly raised. Because of Boeselager's fortuitous timing, his involvement in the operation went undetected and he was not executed along with the majority of the other conspirators. Philipp's brother Georg was also a participant in the plot, and likewise remained undetected; however, he was subsequently killed-in-action on the Eastern Front.

After the war, Boeselager's part in the failed attempt became known and he was regarded as a hero by Germany and France, receiving the highest military medals both countries could provide. He studied economics and became a forestry expert. Even in his old age, Boeselager still had nightmares about the conspiracy and the friends he lost in the war, and urged young people to become more involved in politics, as he felt apathy and the political inexperience of the German masses were two of the key reasons Hitler was able to come to power. The entrance to his residence in Kreuzberg bears the Latin motto "Et si omnes ego non — even if all, not I."

Boeselager was a member of K.D.St.V. Ripuaria Bonn, a Catholic student fraternity that belong to the Cartellverband der katholischen deutschen Studentenverbindungen. Up until his death on 1 May 2008, he still had the Walther PP pistol he was supposed to shoot Hitler with.

On April 18, 2008, just two weeks before his death, Philipp von Boeselager gave his last videotaped interview. It was conducted by Zora Wolter for the feature documentary, The Valkyrie Legacy. It will be televised on History (a.k.a. The History Channel) in Spring 2009 to coincide with the release of Valkyrie, starring Tom Cruise and directed by Bryan Singer. The documentary was produced by Singer and directed by Kevin Burns."