Catholic Control of The Supreme Court 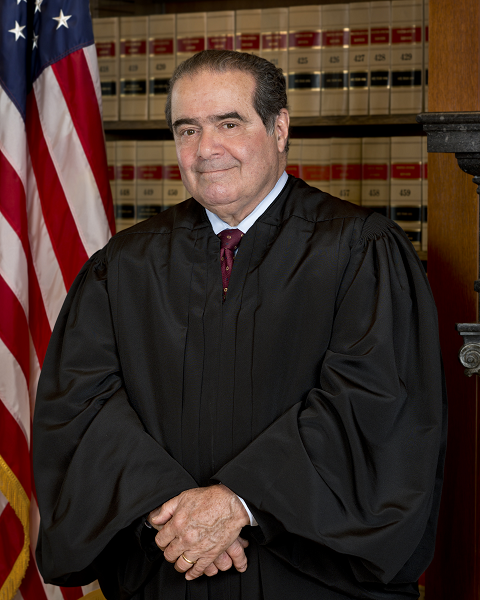 "The conservative justice railed against his fellow justices, calling the majority opinion "egotistical" and pointing out that the justices were a homogeneous group that didn't represent the people. As proof, Scalia pointed out that many went to the same law schools, and none were evangelical or protestant Christians."~Source (1) - (2) 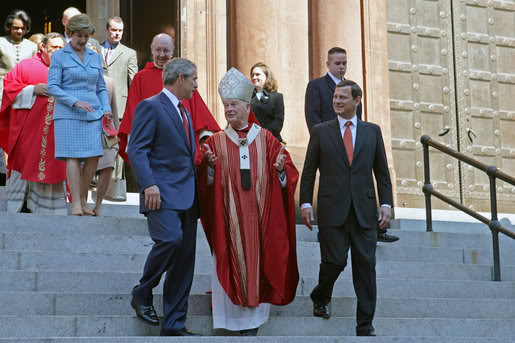 President George Bush walks out of St. Matthew's Cathedral with Cardinal Theodore McCarrick (Who is also a Knight of Columbus and was recently implicated in child rape and cover-up) and Supreme Court Chief Justice John Roberts after attending the 52nd Annual Red Mass in Washington, DC, Sunday, October 2, 2005. The Red Mass, a historical tradition within the Catholic Church, is held on the Sunday before the opening session of the Supreme Court.

6 out of 9 Supreme Court Justices are religious Roman Catholics. This is the first time in history that there have been so many Catholics on the Supreme Court. (Obviously this page was done when Bush was President. Obama is every bit as subservient to the Papacy as the Bush family is.)

"The centennial was officially celebrated on Monday with a historical Red Mass in St. John’s Church. The Red Mass was designed to ask St. Thomas More and St. Ives, patron saints of the legal profession, to bless the law profession and offer guidance for justice." *SOURCE*


The Pope deemed Thomas More Patron Saint of the politicians But really he was a murderer and a very wicked man. (His wickedness is even documented in Foxe's Book of Martyrs" in the 12th Chapter)

Just an example from Ohio (This happens in every state!) 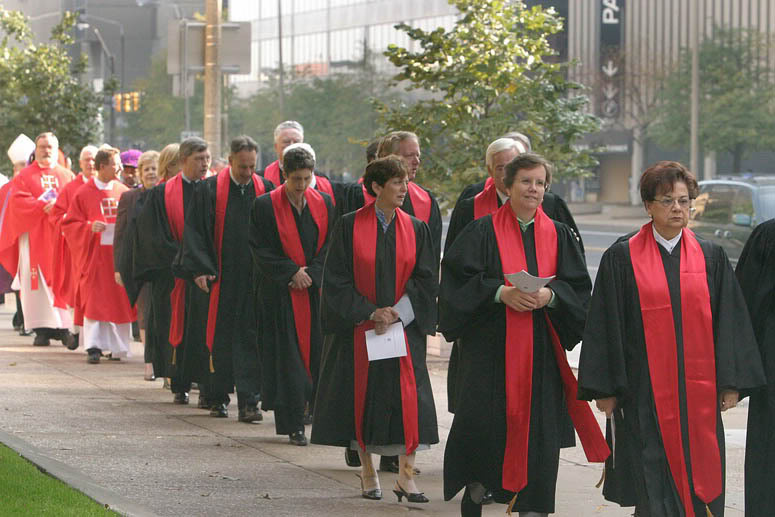 Catholics make up the largest relgious denomination in
Congress at around 130. That's more than twice the amount of Jewish members. (Looks like the page I linked to was deleted. Must be more Vatican editing.)

Tommy George Thompson - Roman Catholic. Was the 7th U.S. Secretary of Health and Human Services and the 42nd Governor of Wisconsin.

Shortly after leaving his Bush Cabinet post, Thompson joined and served for two years on the board of directors of Applied Digital Solutions, makers of the controversial VeriChip: a glass-encapsulated RFID chip that can be injected into human flesh for various database-driven identification purposes

Diane S. Sykes, A graduate of Northwestern University and Marquette University Law School, was appointed a justice of the Wisconsin Supreme Court by Gov. Tommy Thompson.

The Roman Catholic Church in Italy By Alexander Robertson 1905

Most of these are my pages I have put together from reading many different sources.

Kenneth Merian AKA "a Catholic Texan"

the Holy Spirit is NOT female

Mark of the Beast

Rome in America Link
A Foreign Threat, Jesuit Terrorist Link
Protestant Jesuitism, 1836 (???) Link
The Gunpowder-Treason, 1679
Link
Secret Instructions of the Society of Jesus Link
A History of the Gunpowder Plot, The Conspiracy and its Agents by Philip Sidney 1904 Link
History of the Progress and Suppression of the Reformation in Spain in the 16th Century by Thomas M' Link
Where Are the Millions That Mother Teresa Collected Link
JESUITS in the History of INDIA (might be pro jesuit) Link
The History of Protestantism - Rev. J. Wylie, 1878 Link
History of the Jesuits; Their Origin, Progress, Doctrines, and Designs by Giovanni Battista Nicolini Link
Why Priests Should Wed by Justin Fulton Link
Marie Monk, A Nun Tells All (Awful Disclosures) Link
Romanism in the Light of History Link
Identity of the Festivals of Rome and Babylon Link
The Fight With Rome Link
WASHINGTON IN THE LAP OF ROME, JESUITS STEALING LIBERTY THEN AND NOW Link
ABC Library of Foreign Conspiracy, The Jesuits
Link
Dealings with the Inquisition; or, Papal Rome, Her Priests, and Her Jesuits, with important disclosures
Link


Archive of books on Jesuits (some favorable)

A Candid History Of The Jesuits

The Power and Secret of the Jesuits
Videos: