There's a lot of kind and moral people in the Seventh Day Adventist church but they're on false doctrine and study the writings of Ellen G White too much. Many of them have contacted me and push their Sabbath Doctrine. I believe that once a person becomes born again that person has entered into the sabbath for the rest of their life. They rest from his own works and Jesus works through them. (Matt 11:28; Hebrews 4:9-11)

9 There remains therefore a rest to the people of God.

10 For he that is entered into his rest, he also hath ceased from his own works, as God did from his.

11 Let us labor therefore to enter into that rest, lest any man fall after the same example of unbelief.

The SDA "church" would have us to believe that we rest from rest. How does that work out?

The Sabbath is in keeping the first and greatest commandment. Loving God with all your heart, mind, soul and strength. And Jesus connected loving your neighbor as yourself to it and said, "On these two hang all the law and the prophets." Matthew 22:36-40

If someone wants to observe a day and do no servile work, or if they don't want to eat meat, then by all means, do what you like. But don't push your beliefs on others. Even Paul instructs on this very thing in the 14th chapter of Romans.

5One person regards one day above another, another regards every day [alike]. Each person must be fully convinced in his own mind. 6He who observes the day, observes it for the Lord, and he who eats, does so for the Lord, for he gives thanks to God; and he who eats not, for the Lord he does not eat, and gives thanks to God. 7For not one of us lives for himself, and not one dies for himself; 8for if we live, we live for the Lord, or if we die, we die for the Lord; therefore whether we live or die, we are the Lord's. 9For to this end Christ died and lived again, that He might be Lord both of the dead and of the living.

11For it is written, "AS I LIVE, SAYS THE LORD, EVERY KNEE SHALL BOW TO ME, AND EVERY TONGUE SHALL GIVE PRAISE TO GOD."

12So then each one of us will give an account of himself to God.

13Therefore let us not judge one another anymore, but rather determine this-- not to put an obstacle or a stumbling block in a brother's way. 14I know and am convinced in the Lord Jesus that nothing is unclean in itself; but to him who thinks anything to be unclean, to him it is unclean. 15For if because of food your brother is hurt, you are no longer walking according to love. Do not destroy with your food him for whom Christ died. 16Therefore do not let what is for you a good thing be spoken of as evil; 17for the kingdom of God is not eating and drinking, but righteousness and peace and joy in the Holy Spirit. 18For he who in this [way] serves Christ is acceptable to God and approved by men. 19So then we pursue the things which make for peace and the building up of one another. 20Do not tear down the work of God for the sake of food. All things indeed are clean, but they are evil for the man who eats and gives offense. 21It is good not to eat meat or to drink wine, or [to do anything] by which your brother stumbles. 22The faith which you have, have as your own conviction before God. Happy is he who does not condemn himself in what he approves. 23But he who doubts is condemned if he eats, because [his eating is] not from faith; and whatever is not from faith is sin."

You will often hear an SDA member state doctrines about hell that are complete heresy. they also believe in another strange, man made doctrine called "Soul Sleep". Here's a Audio Message I did about the SDA "church".

I've gone around and around debating with dozens of Adventists who have contacted me and I'm finished doing that so please don't send me an email trying to debate with me. I'll only ignore it.

Plenty of people online pointing out the many errors of the SDA sect, but I'll only point to a few on this page.

"In many respects Ellen G. White appeared to hold to the historic Christian faith. She believed in Christ’s imminent bodily return, she held to the inspiration and authority of the Bible, and she taught that we are saved by Christ’s righteousness rather than our own. But amid that truth were some dangerous false teachings. I will focus on only two.

The most obvious false teaching was the one that gave the Seventh-day Adventists their name: the view that the proper day of worship is Saturday rather than Sunday. Shortly after James and Ellen married, they studied a tract written by Joseph Bates titled Seventh-day Sabbath and became convinced that they were to keep Saturday as the sabbath. Six months later, Ellen had a vision in which she saw the law of God with a halo of light surrounding the fourth commandment. She and her husband took this as proof that their newfound understanding was correct. They elevated this to a doctrine of first importance.

Of far more concern was White’s aberrant view of death, hell, and eternal punishment. Adventists adopted several key tenets including one stating that God does not eternally torment sinners, but that the dead enter into soul-sleep until the second coming and last judgment. At that time the punishment for sinners will be that they cease to exist." ~Source

There is Mormon link also for the SDA's. It is a proven fact that Ellen G. White plagiarized most of her writings. The Church has been challenged by Walter Rea, author of the White Lie to prove that even 20% of her writings are original. They can't. Their weak defense was that there were no copyright laws in Ellen's day, so what she did was legal. You will never be told of her plagiarism by the SDA's.

As Ellen was rising to prominence, Joseph Smith had just died. Her writings contain many phrases used by Joseph Smith. Mind you, he has also been accused of plagiarism. I have a thick file of similarities, but time does not permit details at this time, but it does illustrate just how far her "borrowing" went. You will definitely not be told of her similarities to Joseph Smith at the Seminars!" ~Source

"Ellen G. White subjects the Bible to the scrutiny of her "Testimonies" through the agent of her own self-proclaimed authority, supposedly given by God. By what reason should a person accept the self-proclaimed words of Ellen G. White over those of the Mormon, Joseph Smith, or the Jehovah's Witness, Charles Taze Russell, or the Christian Science, Mary Baker Eddy? All of them claimed to have received revelations from God, were self-proclaimed prophets, and all of them presented no credentials to verify their claims and all contradicted one another. Someone had to be wrong, and based on their track record of prophecies, it appears they were all wrong." ~Source


Seventh Day Adventist Documentary Plus Commentary By me


This video shows that Ellen G White was a false Prophet and a plagiarist. According to this video, Ellen G White didn't even write "the Great Controversy" herself.

Ellen G White has an Obelisk at her grave site. An Obelisk is symbolic of an erect penis and it is masonic and satanic.

"The Ancient Romans were strongly influenced by the obelisk form, to the extent that there are now more than twice as many obelisks standing in Rome as remain in Egypt. All fell after the Roman period except for the Vatican obelisk and were re-erected in different locations.

The tallest Egyptian obelisk graces the square in front of the Lateran Basilica in Rome." 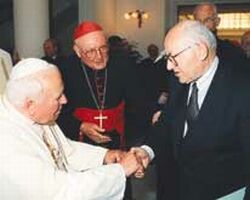 "Beach's encounter with the Roman Pontiff came as a  member of the Christian World Communions, and following a special luncheon at the Vatican." Review Nov. 8, 2001 [Note:  The Seventh-day Adventist church is the member, not Beach individually.  Beach was representing the Adventist church.]

St. Louis television broadcasts the SDA church calling the pope, "your holiness(!)" then meeting the "man of sin" and presenting him with a gift.